In most parts of the developing world groundwater lends itself as the most economic water resource in terms of its development and long term management, particularly at the village community level. However in many areas the groundwater is limited to narrow vertical fractured zones that are highly localized geographically resulting in very low water well drilling success rates of less than 25 percent. This ultimately leads to very high costs in the development of these groundwater resources and thereby depriving some of the other potential beneficiary communities of drinking water.

MEK staff were engaged in a three-year research program to help develop suitable groundwater exploration techniques to enhance the success rate of realizing water wells and also obtaining higher well yields in one of such hydrogeologically difficult terrains, the Afram Plains of Ghana. The objective of the research was twofold: develop methods to enhance the success rate of drilling successful water wells in the region, and secondly enhance the capacity of an identified humanitarian organization in-country to be able to independently and effectively use the method(s) developed.

The plains is underlain by hard, low porosity sandstones, shale beds with sandstone lenses and thinly bedded mudstones. All these rock formation are overlaid by a weathered clay layer, several metres in thickness. Three aquifers were identified during the preliminary desk top studies: the weathered clay overburden material, the narrow near-vertical fracture zones and the occasional poorly consolidated gravel bed.

The few successfully completed water wells in the region were less than 100 metres deep and most of them had very low yields. The relatively higher well yields were found to be associated with the near-vertical fracture zones that have very limited spatial extent of a few metres on the surface (Figure 1).

Figure 1a. Two drilled locations separated by a distance of less than 10 meters. One drilled location resulted in a successful well and the other a dry hole proving the narrowness of the fractured zone.

Therefore the major focus was to locate prospective water well points through the identification of these narrow fractures zones (which are linked with recharge sources) at a cost effective rate.

As such the research involved using remotely sensed data (satellite imageries and aerial photographs) in conjunction with Geographic Information System techniques to locate favourable areas associated with fractures within roughly a 50 to 200 meter radius on the ground (Figures 2a and 2b). In line with this, the Landsat thematic mapper imagery (resolution- 30m and 120m in thermal infrared band), SPOT satellite imagery (resolution -10 m), the European Radar satellite imagery (resolution – 30m) and stereo aerial photographs (scale – 1:40,000) were utilized in identifying promising locations on the ground for further ground-truthing. However, quite early during the study, it was noted that both the Landsat and radar imageries were not very suitable for the study because of their poor resolution after processing. It was difficult identifying groundwater related features on these imageries (Figures 3a and 3b).

The aforementioned studies using the remotely sensed data focused on areas within a 2-kilometre radius of the selected communities. Within these areas, likely indicators of groundwater such as lush vegetation, linear and structural geological features, drainage flow characteristics etc. were identified from the imageries and aerial photographs and located on the ground using GIS techniques for further exploration.

Figure 2a is a SPOT imagery of one of the targeted villages. It has a resolution of 10 meters and is of the same scale as the aerial photograph in Figure 2b. However, the terrain features are not very much detailed as observed on Figure 2b. Figure 2b is the aerial photograph of the same village. It has a resolution of 1 meter and therefore showed more details terrain features compared to Figure 2a. The SPOT imagery was found to be more suitable for regional studies to narrow promising area or regions for more detailed ground investigations. The aerial photographs were better suited for more detailed localized studies to locate the well sites. Prominent lineaments (usually associated with groundwater) are shown with red arrows on the aerial photographs. The blue arrows points to the path of a seasonal stream.

Figures 3a and 3b: The Landsat imagery (a) and Radar imagery (b) of the same targeted community. Note that groundwater related features are not easily discernable on these two imageries.

The “favourable” features identified from the satellite imageries and aerial photographs then became the targets for further detailed ground investigation to identify these narrow fractured zones on the ground by systematically interpreting the observed structural geologic features and geophysical survey data. The objective of the geophysical investigations was to identify the narrow near-vertical fracture zones and thin fracture systems ,which have been found to be associated with thicker weathered clayey overburden and characterized by increased moisture content with depth (Figures 4). As such electrical geophysical methods were deemed appropriate because they will be sensitive to increased depth of weathering and moisture associated with the fractured zones being targeted for development.

Figure 4b. A series of the near vertical narrow fractures systems associated with groundwater exposed at the ground surface.

Three geophysical techniques were initially deployed for this study. These were the direct dc resistivity method, the transient electromagnetic method and the frequency electromagnetic technique (Figures 5a, 5b and 5c). However, the resistivity technique was discontinued mainly because it mostly lacked spatial resolution to resolve the near vertical resistivity contrasts, and secondly because of the difficulty in gaining good electrical contact with the dry ground surface. The transient electromagnetic technique (using Geonics EM-47 instrument) was also used but was found to be relatively much more time consuming compared to the frequency electromagnetic (FEM) (EM-34 instrument), which was mostly used for the geophysical studies.

Figures 5a and 5b. (a) A MEK staff conducting a direct dc resistivity survey and (b) a transient electromagnetic survey at the research area using the Schlumberger resistivity array and the receiver central loop configuration, respectively, to locate near vertical fracture zones in one of the targeted villages in the research area. 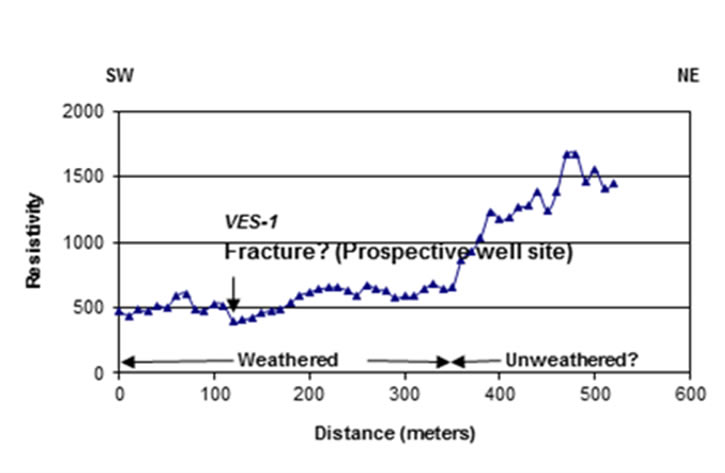 In the application of the FEM geophysical technique, an electromagnetic wave is continuously emitted from a 60-cm diameter transmitter loop (Hazell et all, 1992, Boeckh, 1992). This creates a secondary electrical conductivity field in the subsurface, the amplitude of which is dependent on the electrical conductivity of the subsurface. The amplitude of the secondary field is measured at a 60-cm diameter receiving loop. For this technique, the depth of investigation is dependent on the dipole spacing and orientation. The three dipole spacing of 10, 20 and 40 meters were deployed but the 20-meter spacing was found to provide the optimal results and was mostly utilized during the survey. The FEM survey lines were orthogonal to the lineaments identified from the imageries and aerial photographs (Figure 6). 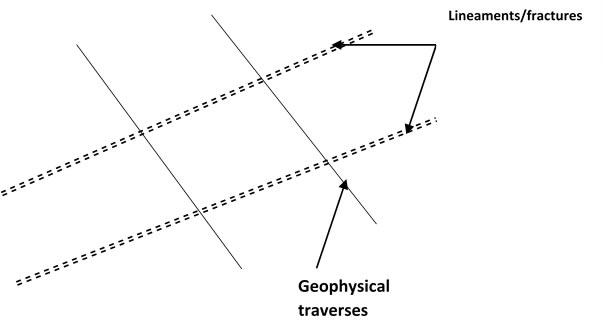 Decisions on the ultimate water well locations were based on the outcome of the satellite imagery and aerial photographs interpretations and also geophysical survey results. However, the result obtained from the geophysical surveys was the overriding determining factor in the selection of the final prospective well sites for drilling because of the technique’s ability to refine the locations of the targeted fractures and lineaments to a 3-meter narrow zone on the ground surface.
From the study it was concluded that dramatic increments in both well drilling success rate and well yields in the difficult hydrogeological meta-sediments terrain of the Ashanti Afram Plains of Ghana can be achieved using terrain features, SPOT imagery and FEM geophysical techniques alone. In fact well drilling success increased in certain areas from as low as 10 percent to over 60 percent and above in the research area. Additionally there were significant increments in well yields in wells completed using the combination of these techniques when compared to earlier successfully drilled well realized using only “terrain evaluation” techniques. As one of the main objectives of this study, local hydrogeologists and water specialists were trained well to independently conduct FEM surveys and also accurately interpret the survey results. 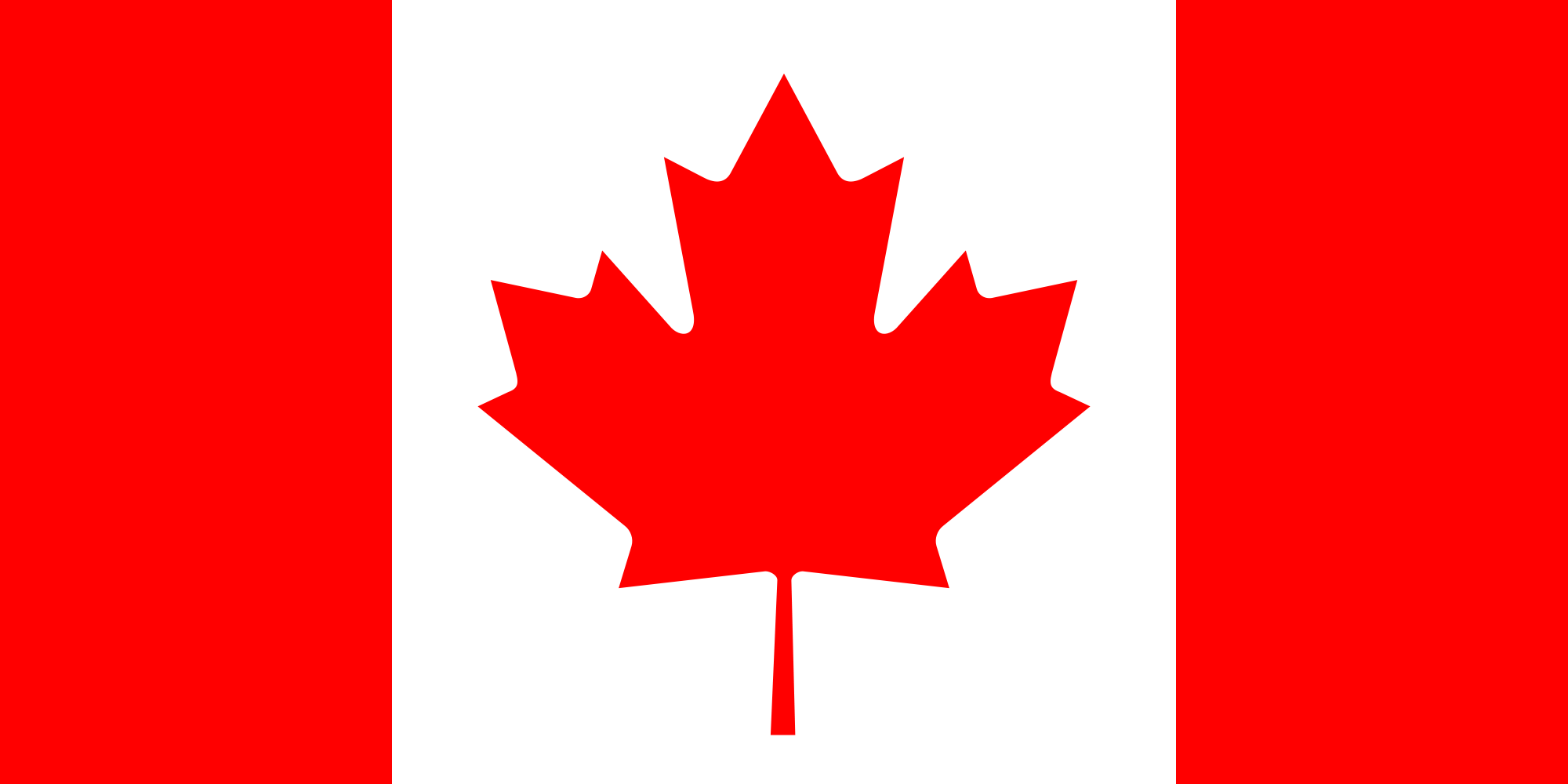